Born in Rome, Italy, Claudia Buttaro-Pfeffer grew up in Arlington, Virginia, and has remained actively involved in the operations at the Watergate Salon since 1971. This married mother of two attended beauty school for hairdressers to expand her awareness of the salon business.

Claudia began her career at the Watergate Salon as a receptionist. When her mother retired in 1989, she took over the management of this popular salon. Claudia Buttaro presently resides with her husband, Ron, in Arlington, Virginia. Her daughter Cristina is a journalist, while her son John is a currently serving in the United States Navy.

Antonio Buttaro was born in Potenza, Italy in 1920. He worked with the Italian Intelligence Service until 1958, when he accepted an appointment to the Italian Embassy in Washington, D.C. as Secretary of the Italian Military Attaché, where he remained until 1973. Buttaro went on to become involved in the Watergate Salon, working with his wife Angela, to develop the new salon’s stylish concept, facility, and fantastic staff. He called upon his Italian roots and recruited talented European staff by advertising in the Italian Magazine, Estetcia.

In 1985, Buttaro opened a beauty salon called Europa International Salon and a high-end Italian boutique, specializing in Gucci products called Antonio Buttaro Boutique in New Port Beach, California. In 1990, he expanded his fashion infused business by opening the Versace Boutique in Cleveland, Ohio. Unfortunately, health issues demanded the sale of all of his salons and boutiques outside of Washington, D.C. in 1992. Antonio Buttaro passed away in 2006, his wife currently resides in Arlington, Virginia.

History of the Watergate Salon 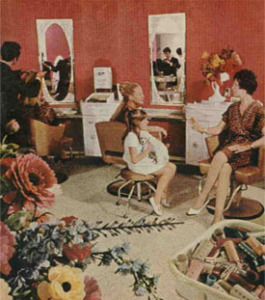 The Watergate Salon was inaugurated into business within the Watergate Complex on November 3, 1966. Italian Architect Moretti, who designed the Complex, offered Antonio Buttaro this prized location for establishing his salon.

The Watergate Salon is discreetly tucked away on the lower level, among the elegant shops of the infamous 231-unit building located at 2532 Virginia Avenue, NW. The 2,200 square-foot salon has been the beauty hub for political and social Washington since its inception and appeared in Life magazine in 1969, with a full-page photograph of Mrs. Mitchell, wife of the Attorney General and Mrs. Stans, wife of the Secretary of Commerce enjoying the Watergate Salon’s services.

The Buttaro family has invested heavily in keeping their prestigious 35-year old salon current with its wonderful staff, as well as the fashionable accessories boutique located at the front of the salon featuring German and French skin products, handbags, elegant scarves and costume jewelry pieces. They also offer the most current techniques and product lines, such as Skinceuticals, Guinot, Biodroga, and Essensa, plus state-of-the-art skincare services like Oxygen and Power Peel facials performed by highly trained estheticians, as well as award-winning European hairdressers. The salon is also noted for its excellent team of manicurists and the exceptionally soothing massage therapist, trained in many European and Asian techniques which she has incorporated into her services.